It was like the Cantina tavern scene from Star Wars, only on a public ocean beach. It wasn’t pretty.

We were headed to San Luis Obispo, California, when Bill saw the sign for Pismo State Beach. “Let’s stop there,” he said.  We had made sandwiches for a picnic lunch along the way.

Pismo is the only beach in California where it is permitted to drive a standard highway vehicle along the shore. This is critical information for this story.

Our turnoff led to the Oceano Campground area which is close to the sand dunes. A check-in booth was at the end of the road which then turned into sand and led to the beach. A line of vehicles waited for admittance to drive on the sand. A line of vehicles on the beach was coming towards the booth, done with their day’s adventure.

We took our lunches and folding camp chairs and made our way to the beach with a cloudy sky overhead.

It’s hard to describe the scene so I’ll let the pictures that follow do most of the work. Here is a litany of what we saw: A few people walking on the beach, people fishing, recreational vehicles, trucks, many with flags flying from their antennas, cars – including a red sports car, ATV rental buses and vans carrying people off to raucous sand adventures, police patrol trucks with lights on top, bicycles, horses, people walking dogs, a bi-plane soaring in the sky above with “RIDES” painted on its underbelly.  Oh, and vehicles stuck in the sand.  And people who had fallen from bicycles stuck in the sand.  And private trucks offering to pull vehicles out of the sand – for a fee.

People living in the houses abutting the beach are a daily witness to the spectacle.  Perhaps a bit like sidling up to the bar and watching the patrons. Plenty to entertain, amuse and sometimes shock. 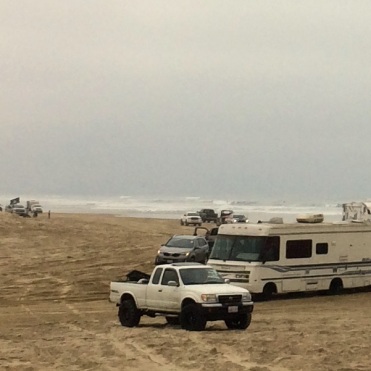 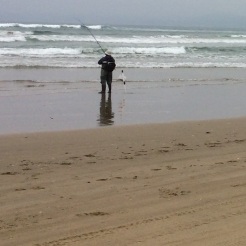 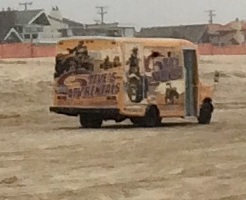 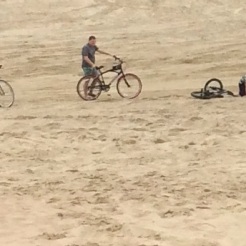 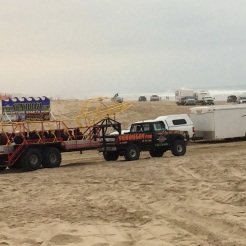 And yet there was something missing . . .

The Monarch Butterflies who flock to Pismo State Beach and its eucalyptus trees to shelter during the winter had finished their sheltering last month and moved on. Pismo Beach hosts one of the largest colonies of Monarch butterflies in the country; over 25,000 have wintered there over the last five years.

Life is incongruous. I cannot meld the image of the butterflies with the cacophony of the sand parade on the beach.  We were there in late winter; summer would be even more wild as this traveler’s picture suggests:

In the end, this was a party that left me with a bad hangover. Whatever are we thinking that we crowd our beaches with machines that ride roughshod on natural beauty as if to say, “we control; we’re in charge.”  Human domination run amok.

Across the country this year, the weather has reminded us that we are not truly in charge.  Perhaps the weather is having its own party at our expense in a “turnabout is fair play” moment.

Are we listening? Are we willing to change?