A previous post, It’s Worth the Drive, was about the unexpected discoveries of food on the journey. Arguably, not everything is about food…

We left Seattle on February 25th. We had a pretty substantial itinerary ready for us before we left.  So, not every stop we made was unexpected. Nevertheless, each stop held something special or unexpected for us. Each stop was worth the drive. Here are some examples:

Our first day was about a 400-mile drive that took us through Central Washington into Eastern Oregon. Once we passed Pendleton we were heading up to the high plains of Oregon into the Blue Mountains. Our first stop was Baker City.

The drive there took us through some spectacular mountain ranges on either side of a long valley. Baker City’s elevation is about 3,000 feet. For the next three weeks, we would stay between 2000 and 7000 feet; with a few dips to about 500 feet. The elevation would change during our drive but the terrain never did; it was spare, dry, open, filled with sagebrush or cactus or small scrub trees, with vistas pulling our eyes to the horizon. We were in what I would call the high desert and would stay there for three weeks.

Baker city has a charm that some small towns seem to wrap around themselves like a warm blanket. Nestled in the mountains, mining is a major part of their identity. Eastern Oregon University is in Baker City and expands the reach of this small town. And a very good local brewery adds to its sense of place. We had good small-town food that first night at Barley Brown’s Brew Pub. 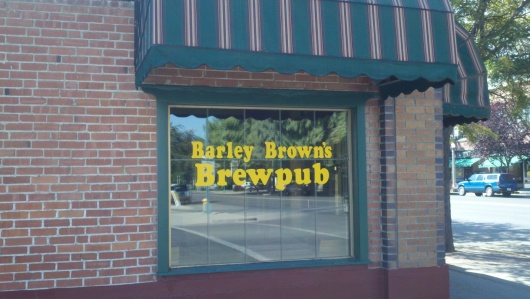 Baker city is worth the drive for some beautiful terrain, an introduction to high plains, and a small town with great character.

Our second day was also a long one, about 450 miles, and it took us from Baker City to Ogden, Utah. We’ve covered part of this drive from Brigham City to Provo, Utah in a previous trip. What I really want to lift up here is that the drive from Brigham to Provo is jaw-dropping. The Wasatch Mountain range is a 100 mile rampart that stretches along the eastern edge of that valley. The Golden Spike (a ceremonial final spike driven to join the rails of the First Transcontinental Railroad across the U.S.) was driven into the earth just a little east of Brigham City. So, whatever your religious affiliation or transportation preferences, this is a Drive that is very much worth taking.

Well, the point of this post is not to give a day by day travel narrative. I will but that must include refreshments at your house. But what I really want to say is that planned or unplanned each day has its own surprises.

So, on the drive from Albuquerque, New Mexico to Flagstaff, Arizona, we came across a road sign that said Petrified Forest National Park ahead. Well, when I was five years old, my mother, grandmother, uncle and I took a drive from Los Angeles to St. Louis along Route 66 which just happens to go through what is now known as the Petrified Forest National Park. In 1952 it was not yet a national Park but just a stop on the road. We stopped there for a short visit.

Diane and I, on the spur of the moment, decided to take the exit. This is one of those few national parks where the entrance to the park is about 500 feet from the exit ramp.

It was not a promising stop. Every place we looked was flat.  We stopped at the visitor center to get some helpful information on how to plan a short tour at the park. A half-mile later we realized that sometimes flat means that you can look down from above and we did. Do I use the words stunning, awesome, beautiful too often? The Grand Canyon has greater grandeur, the Badlands National Park is more intense and its terrain starker, but this park had expanses that made my heart ache for boundaries. Miles and miles of the beauty of erosion. And an environment that turned wood into stone and has not changed for millennium.

This place, with all its beauty, was not on our itinerary. It was worth every mile of a drive to get there. 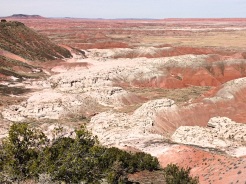 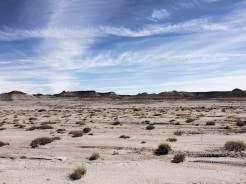