It’s 6am. We wanted an early start for our drive to Oklahoma City today. I’m startled to find it’s still dark outside. I’m disoriented. It hasn’t been dark at 6am since March in Seattle. We crossed another time zone yesterday. We also crossed a terrain new to us; the Texas Panhandle.

Some highlights. Wide open landscapes and huge windfarms. A billboard that encouraged us to buy the “Obituary App” so we could track obituaries anywhere in the country. “Picnic stops” and “Parking stops” but no “Rest stops.” There were no restrooms in either the picnic or parking stops. There are not many bushes to pee behind. I guess that’s why there are so many truck stops along Interstate 40.

Truck stops have become our friends. Wide bays for maneuvering RVs to get gas. As easy grab of another Frappuccino to keep the driver awake. Clean bathrooms. Brief conversations with people you’ve never met. AND, at Santa Rosa, New Mexico yesterday, we paid $1.96 a gallon for gas. They all have fast food places attached which can be useful if you’re desperate but the fried food smell can be obnoxious to smell after several stops in a day.

I didn’t appreciate the smells of the cattle yards as we drew closer to Amarillo.

I did appreciate the storm that created a lightening show and cooled the temperature with rain. I was glad we had just settled into our RV park for the night when it occurred. I was surprised by the strength of the wind that came later in the evening and rocked our trailer some. We were watching President Obama give his speech at the Democratic National Convention. As he talked of our country, the rocking seemed appropriate.

The biggest gift Amarillo gave us was a night we could sleep in the cool without any fan or air conditioning on. It was the first time for that since we left Idaho and entered Utah and New Mexico and temperatures in the high 90s and low 100s.

The day ended with a beautiful sunset and grateful hearts for all we have experienced. 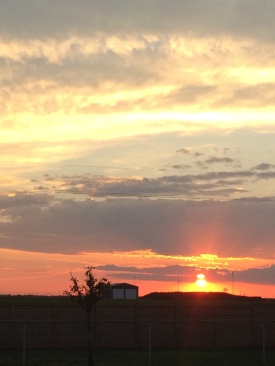